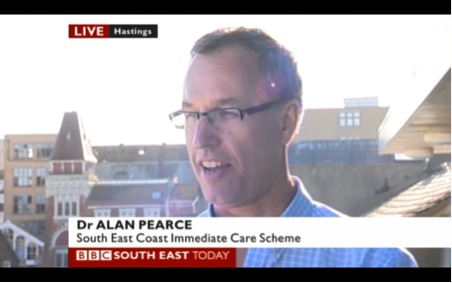 A man was critically injured after he became trapped in a car crusher when his legs were entangled in the machinery today in a scrap yard near Hastings, East Sussex.

Emergency services were called to a vehicle dismantling yard in Westfield, near Hastings, East Sussex at about 08.35 this morning where a 40 year-old worker had become trapped in a car crushing machine. Both his legs were crushed by the machinery and he was trapped for about 45 minutes. The man was treated at the scene by a medical team including doctors from SIMCAS, the immediate care charity; the Air Ambulance and paramedics from South-East Coast Ambulance Service.

Emergency blood supplies were rushed to the accident and he was given a general anaesthetic before being cut free by East Sussex Fire and Rescue. The Air Ambulance flew him to the Royal London Hospital, Whitechapel for further surgery.

SIMCAS doctor Alan Pearce said “This was a nasty incident for everyone involved. It was comforting to know that the pain relief and anaesthetic that we gave him, because of the horrific injuries, helped reduce and relieve his suffering.”

Police and the Health and Safety Executive are currently investigating the cause of the accident.