Two lighting engineers installing Christmas lights in Tunbridge Wells town centre fell approximately 30 – 35 feet on Monday night (14th October 2013) after a double decker bus collided with the cherry-picker vehicle in which they were working. The basket was thrown to the ground by the force of the impact that occurred on Mount Pleasant Road just before 11pm. Both workmen landed on the road sustaining injuries.  They were treated by Mr Tony Kemp, a nurse member of SIMCAS.

Tony, working with two ambulance crews  and the Fire and Rescue service attended the workmen, one of whom sustained relatively minor injuries whilst the other sustained more serious injuries that later entailed him being transferred to Kings College Hospital. Both men were taken from the scene by separate ambulances to the Tunbridge Wells Hospital at Pembury.

After the incident Tony said “From the outset it was apparent that one of the two men had sustained serious injuries and the emergency services worked together to ensure his rapid stabilisation and transfer to hospital.” 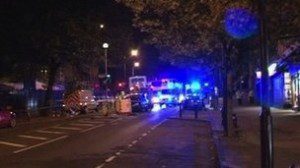